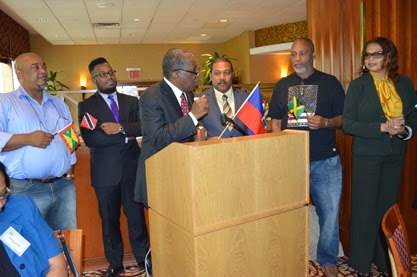 Under the theme: "Greater Leaders are Hard Workers" the aim of the coalition is to ensure a decrease in unemployment, by encouraging minority New Yorkers with ties to each of the Chambers mentioned, to start their own businesses and become entrepreneurs who will determine their own destiny. One of the speakers for the Juneteenth Reception, Rev Dennis Dillon, publisher of the NY Christian Times, challenged the large audience gathered to adopt a new mind set about business in order to experience economic changes in the colored communities here in Brooklyn and across New York State. He said that the social agenda that we are accustomed to must be made less important: "I am not suggesting that the social agenda among us as black people, as black America and as a people here in Brooklyn is not important, but, we have got to allow the business agenda to set the tone for the empowerment of our communities and the transformation of our people. We have seen our politicians and the leaders of our communities allow the social agenda to overpower the commerce and the business agenda and so we become emotional about the need for health care. We become emotional about the need for education and the need to have a good justice system in our community failing to recognize that if we do not put in place a full economic infrastructure, we will never be able to establish a full social agenda. So, as Brooklynites, we as a people, got to begin this journey to transform the minds of our people where we allow everything to be built on an economic foundation."

According to Reverend Dillon, there needs to be an awakening of economic realities among the colored communities. He noted that a trip to South Korea in 1999 embolden his desire for economic prosperity as he noticed that there were lit crosses on every businesses in the City of Seoul, an indication that this nation that was once poor economically, placed God in charge of it businesses, thus the need for spiritual dependence and guidance. He stressed that while sociology has its place in society, it must be complimented with economics and politics in order to be effective: "where there is no spiritual foundation, there is no economic power, and where there is no economic power there can be no legitimate political control, and without political control there will always be a sick sociology.

We cannot solve the sociological illnesses that we face in our communities without strong political leadership and we will never have respected political leadership amongst our people, not in the Caribbean, not in Africa, not in New York, not in America, not anywhere in the world until we have economics to protect because in the absence of economics there can be no true politics. That's our dilemma as a people in Africa, the Caribbean, in Detroit, in Harlem, in South Africa and that's our dilemma in Brooklyn. So it is only as we begin to change our mindset and begin to think differently can we truly bring about the change that we need. On this Juneteenth on this important day for blacks in America, I want to challenge us to do some things differently. I want to encourage us to adopt the Koreans formula of doing business here in New York. Go to any Korean store —you will notice that they do not sell any products that are labeled made in China. They only sell products that say made in Korea; it is a very important dynamic. I noticed that Jamaica reported that in 2013, remittances were the largest foreign income earner for the country. Jamaicans living here in New York and elsewhere overseas sent back home some $3 billion to that country…. So we represent power, there is no question about it. The seventh largest airline international carrier to the three ports in New York City happens to be Caribbean Airlines/Air Jamaica we transport more international travelers more than any other international carriers, except three; that is British Airways, Air France and Air Lufthansa. That is a lot of dormant power that needs to be resurrected. So when we talk about this Chamber movement folks I need us to begin to harness our energies together…. The moment we begin to do things apart is when we fail, but when we do things together, is when we create the right kind of transformation and success to our community and bring about the kind of economic redemption that our communities need.”

Posted by Figeroux & Associates at 10:03 AM No comments: