Entrepreneurs know that every small business starts with taking a risk. 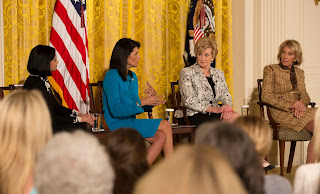 We have an idea for a product or service, but even the best ideas require a leap of faith. Whether it is our money or time or the security of working for someone else, we put ourselves on the line when we pursue our goals. When that risk succeeds… simply put, it’s empowering.

Yet research shows women are more risk-averse than men. Are we missing out on empowerment, too?

I was proud to represent the U.S. Small Business Administration at a panel on empowering women hosted by President Trump and Vice President Pence at the White House in honor of Women’s History Month. Four of the women in the Trump Administration shared the stage and our perspectives on empowerment. It was fascinating to hear that each of our paths to success started by taking a risk – usually against the odds and against the advice of others.

“Women second-guess themselves all the time,” U.N. Ambassador Nikki Haley noted during the panel. “We must tell ourselves to push through the fear because we end up on the other side so much stronger than when we started.”

Ambassador Haley described how she took a risk by running for a seat in the statehouse in South Carolina. Others told her she was too young, she had small children, she should set her sights lower. She ignored the naysayers and took a risk – and not only won that seat, she went on to become her state’s first female Governor.

Education Secretary Betsy DeVos thought she’d play it safe and study interior design in college until she challenged herself to study business and political science instead.

Seema Verma, Administrator of the Centers for Medicare and Medicaid Services, was expected to be a stay-at-home mom, noting she was the first woman in her family in 3,000 years to have a job. But she had her own dreams and a desire to make a contribution in health care, and knew she could be a mom at the same time. She started a career, and later took another risk when she left her job and started her own business.

“We tend to play it safe – don’t take that job or start your own business. What I’ve come to realize is that’s the wrong advice. Even you are even considering it, go for it. Take those risks. The worst that can happen is it doesn’t work out, but you learn from it. It’s better to have that growth and wisdom than not pursuing it at all.”

Probably the biggest risk my husband and I ever took was buying Capitol Wrestling, the parent company of WWF, at the time, in 1982. It was just the two of us sharing a desk, and I’m very happy that risk really paid off.

As SBA Administrator, I am making that message my mission.

There were about a dozen young girls in the audience, and they were invited onstage at the end of the panel. I want each of them to know their power – to have the confidence to think boldly, trust their instincts and follow their passions. To bet on themselves. To never miss an opportunity to learn something new because they fear making a mistake. My goal at SBA is to help create a brighter future – not just for those taking risks by launching and growing businesses today, but for the young people boldly dreaming of their own tomorrows.
Posted by Figeroux & Associates at 2:17 PM No comments: